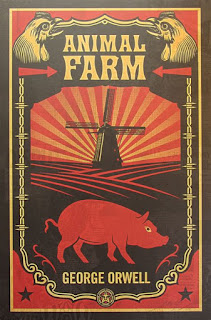 It was a good meeting, as usual, and especially enjoyable as it was the first one for me since pre-Covid.
I first read Animal Farm in high school and loved it. I still enjoyed it this time round. Interestingly, in high school, I was sure that Orwell was describing the Soviet Union and the Communists, but now I see that he can be describing any society where power corrupts and absolute power corrupts absolutely. This time round, I also realized that each of the animals was a metaphor for a type of person. (I was pretty dumb in high school!)Another interesting point that I missed in high school was how each successive generation remembers less and less about how it all began. This is especially relevant, I believe, to Spain today, where many of the younger generation think of Franco and his dictatorship as something to be dealt with very superficially in History class but not at all relevant to their lives today.

We discussed the structure as a gradual narration from a Utopia to a Dystopia
.
The Utopia at the outset was Major's speech, the promise of a windmill, the Battle of the Cowshed, the 7 Commandments... All Community activities

Gradual change was effected through:
- Foreshadowing : Snowball and Napololean disagree, Benjamin´s pessimism, Mollie and the farmer, the milk and apples disapper, Animalism is systematised, the pups are sequestered ny Napoleon...)
- Falsehoods : false memories ( changes in the commandments, how the Cowshed battle was won...).
- False promises : (after the windmill there would be more leisure, Moses and religious beliefs, Squealer's statistics...)

The Dystopia began when Napoleon appeared with his dogs declaring that debates had ended, the mililitarisation of farm life, fear of the dogs and fear that Jones would return, more work and hunger,Beasts of England was abolished, the introduction of Classes : the pigs and others.

The charscters were divided into humans, the pigs, the horses and other animals. The pigs were compared as leaders. Old Major was a positive and respected leader, Snowball was a social leader and Napoloeon was a dictator. The horses wwere divided as foolish Mollie, stupid and hard working Boxer, emotive Clover and cynical Benjamin. The humans were negative among them the neighbouring farmers, one of whom is a fraudster and Jones the alcoholic.

The genre of the book may be considered satire for its exaggeration, an allegory as a reflection of real politics or a fable which is a moral warning about the dangers of creeping totalitarianism.

The theme of leadership led to a discussion of who would be the most appropriate leader. The theme of humour in the book pointed out how the national anthem was a combination of La Cucaracha and Clementine. Fun was poked through the spelling errors in the Commandments,the name of the battle of the Cowshed which Snowball prepsred for by reading Caeser´s Gallic Wars, the Animal hero decorations and the formal marches with dog retinue and a leading black cockerel.

The ending of the book was particularly poignant when the pigs were indistingshable from the humans and the so-called revolution had come 360 degrees.

Hello, I read this book when I was a teenager and I remember, that I was very impressed. In my opinion, it’s a realistic book, one can consider it dystopic, but it describes the worst and the darkest side of humankind.
The development on of the characters is magistral.
Elsa