The Only Story by Julian Barnes

Click on the map below to view it full size.
You can post your own comments, too.
Add a short slogan to summarise your opinion. 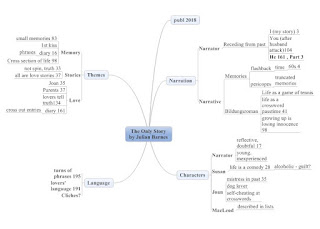 Some points mentioned:
- Susan's alcoholism not in character since she took life lightly as a comedy.
- It's a bildungroman, a growing up story.
- A comedy of errors?
- Life as a game (of tennis), or a pastime (crossword)
- What's Joan's raison d'etre in the book? Mirror image of Pauk?
- Memory theme: well worked into narrative technique.

The weather and the possible interruption of train service made me stay home tonight so Tom suggested I post a comment here. So here goes....
I enjoyed the book - both the story and the narrative style, though coming on the heels of Solar, I couldn't help feeling that this is yet another old man regretting/remembering his youth.
I was especially interested in the changes in how Paul refers to himself: early on as "I", with the self-importance of youth; later as "you", maybe in an attempt to distance himself from the character (?); finally, as "he", looking back on his life from a distance.
This was the second time I read the book. (The first was just for pleasure without any analysis.) The first time round, I had a problem with Susan's alcoholism, thinking that it just came up out of the blue without any warning, but the second time, I could see that there were warning signs.
At the end, it seems she has Alzheimer's rather than just being an alcoholic. Was that related to her heavy drinking or would it have happened anyway?
I believe that not enough attention is paid to Paul as an enabler in the story. He doesn't seem to regret that part of his past.
Sorry to have missed the discussion. I'm sure many other interesting points were brought up.
Renée

Yes, Renee, we also commented on the use of different pronouns and linked it with the narrator's receding from the past mirroring how his memories are actually more and more distant. Memory was commented on as a major theme. Tom

Yes, the narrator mentions memory directly many times in the novel: how it is selective, non-chronological, and often unreliable.

Agreed. The pericope style adopted as narrative underlines the fragility of his memories by paring down the narration to paragraph chunks of information. I believe the author has created this narrating style and the constant reminders on memory to show just how unreliable memories are. The diary with crossed out updates is another symbol of changing thoughts and memories of them.

Answer to Renée (and everybody as well). Perhaps Susan's Alzheimer's has been triggered by her heavy alcohol consumption. In fact, Susan's lack of concentration and her being unable to recognise Paul let us suppose that her state of mind is very deteriorated.

Hi,
Happy New Year 2020... and a New 20’s to you all!
I was just too tied up to pen down my thoughts on the book earlier… Anyway, better late than never… ☺
I found the whole love story very dignified, plausible and in character with both Paul and Susan, who happed upon true love and did the best they could for as long as possible. Their story, the only one for both of them, was bound to end so tragically, if only because they were simple mortals and not “emotionally sophisticated” enough to know how to manage the many obstacles in their path. Despite the age difference, they were perfectly in sync in spirit. It lasted for 11 years, with the latter 6 fraught with enormous and insurmountable difficulties for Susan, who found she was running two households and having to endure Gordon to his undignified end, the very man she was long separated from, refusing to have more children with, and who broke her face to spite her new relationship, thereby dealing her spirit a debilitating blow. Both She and Paul do the best they can to protect their relationship, which is finally the only story that sustains them in their subsequent respective lives.
The narrator of the story, Paul, sorts and cleans out his part of their only story from the morass of memories. Both Susan and Joan would have told it differently with their own practiced strokes. All the same, Paul, in an effort to understand the truths of their love draws the reader along to the understanding that it was better to have loved and lost than not to have loved at all. They had the guts to live their love despite its impracticality.
Why does Susan become an alcoholic? Could it be because alcohol and drugs was a fairly normal escape from an inner feeling of panic and pandemonium for so many, when overwhelmed by their life’s circumstances, despite being a devastating cul de sac. Could the accepted idea of a played-out war generation have anything to do with it?
Susan was portrayed in all her human strength and frailty. Sadly, she went the way of Joan and Gordon and drowned her emotional inadequacy in alcohol, so against her nature, slipping into it almost by default. Paul was left scarred for life by the only story worth telling, that of their love, which is beautiful, despite being so sad.

The memory theme Gemma mentions seems to me to be the lasting sense of the book. Memory is what's left after events, It's the only possible story, even though it will always be partial. The story being told is fiction which is just like memories. They are fictional stories based on ill-remembered facts. Isn't the real story about storytelling?

I believe it is, Tom. it's all about storytelling! Therein the passing of wisdom for successive generations.