The African Queen by C.S.Forester

This month's bookclub will be online due to the pandemic.
Please post your comments on the book below.
Add a short slogan to summarise your opinion.
Sign with your name, not your e-mail.
Stay safe! 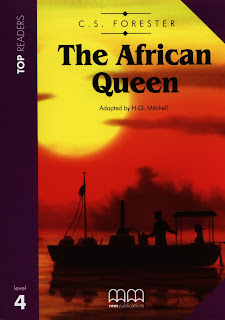 Published in 1956 The African Queen's omniscient narrator still has a slight war hangover which shows in his portrayal of the Germans through Rose, the British naval officer, Von Hanneken and the ship Luise. They are the enemy. However their is an attempt at balancing this dichotomy by showing the ship's commander as a lenient judge. The heroes and heroines are still the Brits: Rose, Allnutt and the British naval officer.

The narration places the reader firmly on the side of the missionaries as victims through pathos (chapter 1) for Rose, her brother and the natives harshly treated by the invading Germans.

It is well-paced through prose changes for example accumulating events at the rapids to parallel the fast flowing waters; drawn out slow prose and repetition to describe the problems of movement at the delta; the confusion and failure of the attack through the bad visibility compounded by the storm; the quiet interludes of teatime. Forester uses reading pace efficiently to convey these high and low moments of the narrative.

Despite their dramatic predicament light humour is also well-employed to lighten the tale. This is especially obvious in the names: Allnutt is a nuts and bolts handyman; Rose is the English virgin on a military adventure, likened, facetiously, to Joan of Arc at the end of chapter 14; "The African Queen" is a fun name for a small tub of a boat; the Queen Luise as the enemy craft: it's a royal battle.

Forester keeps his narration alive through foreshadowing. We know about the rapids before they come to them; the danger of passing the fort was predicted by Allnutt; we read about the planned attack on the Luise in Allnutt and Rose's disagreements.

The characters are made credible through their evolution which the reader experiences on the trip. Rose is a peaceful missionary but turns into a fighting patriot motivated by the same faith. She was a slow thinker and speaker but once liberated and with a goal she became expert and quick with the tiller and the motivator for the plan of attack. Her religion had taught her to look up but she acquired an appreciation for the natural beauty of Africa (74) on her voyage down river. She evolved from prudery to mothering Allnutt (77) and liberating herself of patriarchal dependence.
Allnutt was nervous and voluble, practical and thick (16) but showed himself under stress to be a competent engineer.

The book's language is employed to classify the characters: Allnutt as an uneducated Cockney, Rose as aspiring middle class, The naval officers as gentlemanly and upper class. It is obvious that the narrator is interested in ships yet introduces the reader to the technicalities through Rose so that we read the details about fixing the propeller and shaft and preparing the torpedoes but are not put off by it since it is integrated into the story.

The ending seems rather abrupt since the ship attack fails, the main characters are pushed aside to make room for a bright young officer and the reader is left to speculate on the future relationship of the couple. A fitting end?
Tom

Enjoyable story of derring do, with two social misfits. Rose is free from religious, societial and corset constraints in the African Queen.She finds strength and purpose and teams up with Charlie on a voyage of risks and adventure. Charlie is a dischevelled trader but has a caring side when he seeks out Rose and her brother in the destroyed mission.His nature is tested however,when he is forced to rise to challenges set by Rose on their voyage, including sobriety. He is also challenged by the African Queen with its set of mechanical problens.

Agreed that it is a well-paced yarn. Forester obviously uses his narrator to indulge in his love for boats, well exercised in his Hornblower series.
I also agree that the characters are well-drawn and credible. Though slightly exaggerated they evolve in the novel which allows the reader to believe in them despite neither being truly heroic. A very human portrayal.
The ending seems to me to be rather tacked on with a none too credible flashy officer winning the local war against all odds.
Tom