The Golden Compass by Philip Pullman

This month's bookclub will be online due to the pandemic.
Please post your comments on the book below.
Add a short slogan to summarise your opinion.
Sign with your name, not your e-mail.
Stay safe! 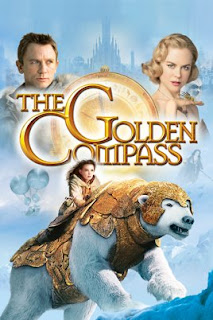 It's a fantasy genre narrative, possibly on the level of Narnia and Harry Potter. There is an accumulation of fantastic characters like daemons, witches and social outcasts. The future can also be forecast using an alothemiometer which is an information source, a google before its time, and an instrument of divination. Foreseein the future is certainly a human fantasy.

A certain religious theme is also present dominated by the Church and its matrix hold on interpretation. It divides the world into two spheres, the spiritual and the sensorial following the Enlightenment models of empiricists and metaphysics, of Locke and Descartes. The irony is that the ecclesiatical tradition was in conflict with the empirical thinking mode then and not at all open to empiricism. In the book heresy is the promulgation of alternate worlds, a nice parody on the sense/spirit dilemma. Morality is also present in a primitive fairytale form as good in the Church and bad in Lord Asriel and Mrs Coulter, a sort of evil stepmother. Religion is also symbolised by the daemons which are people's souls and dust representing original sin. Is there, too, a certein debate between fate and free will? This is another throw back to late medieval times when Protestant thought argued for predestination.

The theme of authority is introduced through the charcters' temperaments and attitude towards the main character, Lyra. Lord Ariel is authoritarian and harsh towards Lyra, though we later discover that he is actually her father. Mrs. Coulter has a prison guard's authority though she is her mother. The gypsies, on the other hand, athough outcasts of society, treat Lyra well and that is their saving grace in the eyes of the reader who identifies with the protagonist. Lyra herself, though only 12, is presented as self controlled, confident in herself, her own authority.

As in most fairytales there are some slightly unexpectedly shocking episodes. The reader sees physical violence in scenes of combat and verbal violence in an amount of swearing by the main character and profanities uttered by Scoresby.

Altogether a patchwork of morality and immorality, good and bad. Some slightly kitsch as when we find out who Lyra's parents really were and others highly sexual and libertarian in innuendo when the long living witches are described as having affairs on and off with many men.

In sum an entertaining read though perhaps too fantastic for an adult readership.

The Golden Compass is a fairy tale for children of 12- years of age. Dealing with the themes of:

Childhood and the innocence at the beginning of life.

Right and Wrong Lyra have a pure idea of what is right, however her father and her mother lives seeking power only for themselves.

Daemons are the representations of a human's soul

Travel and environment Lyra travels are an allegory for her mental journey. At the beginning of the journey she is in a safe place, playing with the other children and at the end of the journey is in the North Pole, where she learns the truth about her family and must suffer the climate and the wild life.

The text uses a third-person narrator. And is written in simple and understandable words .Can be considered didactic because the reader admire the heroine, Lyra, and understand the difference between lie for the sake of evil or lie for the hiding of own disadvantages.

The tale shows a view on the relationship between animals and people from which the reader will realize that spiritual wealth is much more important than material one. It is pleasant to read.

I stopped reading fantasy novels over 75 years ago but I did my homework and finished it. If I had a 11 or 1 year old daugher , ganddaughter or great graddaughter Nohern LIGHTS WOULD BE THE LAST BOOK i WOULD GIVE HER. wHY MOTIVATE A CHILD TO IGNORE common sense, act rashly and look orward to using drugs? Lyra, the 12 year old protagonist is intelligent but feckless. She gets into all manner of trouble and hot water but is ALWAYS miraculously saed by a bear or friendly fairies or cutthroat pirates. What kind of preparation for life is that? She s an orphan raised by Oxford scholars. So much for Academia. She even ignores her Daemon , which is supposed to look out for her and protect her. It seems that the scholars at Oxford dismissed reasoning and forethought in favor of creativity and intuision. Poor Lyra wouldnt have lasted 5 minutes in the real world without her real Daemon, Phillip Pullmans Deus Ex Mahina to save her every time. Perhaps the scholars should have taught her chess. hen she could at least have learned to think one, two, fours moves ahead before leaping into the fray.

Of course , her wonderflly free upbring is the delight of every child. She is gloriously confident, a powerful ring-leaer of her gang of little hoodlums, whipping them into sometimes not so harmless vandalisms and always getting away with it until the bogyman "Gobbler" came alon g and ended the fun phase of her childhood. Then the vector of her character swung to the savior mode. For the rest of the book, she will try to save her uncle, the children, the world.

I confess liking both her biological and wetnurse mothers. Both are strong , focused characters with a lot (in my opiion>) to be admired. Though he mother, Mrs. Coulter, is a total Salome, Medea, Lady Macbeth, Margaret Thatcheer, rolled into on e, she is great enough to warrant the heart of Lord Asriel, the husband she abanoned along with her child. He wetnurse mother, the gypsy is the oposite o all that Mrs. Coulter is , except for her power in the gypsy community. Hee this gypsy matriart definitely outshines Mrs. Coulter.

This is a fantastic book for a preadolescent reader who enjoys this type of fantasy genre.
The characters are interesting and the author writes with much creativity and intensity, but the story is complex and sometimes hard to follow. Not only that, I found it too slow in general but mainly at the beginning.
However, I recognize that if you can take your time and read this fantasy novel it can take you away from the mundane and ordinary life.
In a Word, I wouldn’t pick this book as a first choice to read since I prefer other genres.

I ve never been into fantasy books myself . however, I,ve found this one entertaining and interesting to read.
_ To start with the plot is brilliant, imaginative with a great set of characters: daemons,witches, armourd bears, parallel worlds, child snatchers, exciting adventures ...
_ It´s a good story packed with action,many things happening . sometimes too many which makes certain chapters unnecessary long.
_ Although it can be read at many levels I don´t think it is a children´s book. There are topics that a young reader won´t understand like the critique of religion, the use of maths and physics .nevertheless the theme of friendship applies to everyone-._
- As I´ve said above it has been a good experience reading the book but I wouldn´t read the whole trilogy