The  April book is outlined below in mind map format. You can post your own comments below. Click on the map to view it full size: 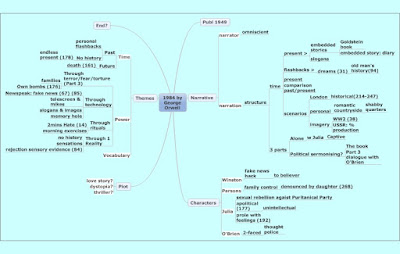 1984, presumably ready for publication in 1948, is an exceedingly disturbing story of a dystopic world that is divided between 3 highly credible superpowers: Eastasia, Eurasia and Oceania that maintain the status quo with a pretence of continuous war, thus keeping the population in a consequent state of disarray, suffering and anxiety.

Winston belongs to the outer party, a hacker employed to falsify all past records, distant and recent, in order to attain a society that lives in an endless present, bereft of history. He is the main protagonist through whose thoughts and actions we experience
1. The poverty and decay of London in which things don’t work and are not fixed (derelict state of Victory Mansion).
2. A love affair with Julia, employed in the fiction department of the outer party, who falls in love with him, and with whom he prospers in the enjoyment of a sexually fulfilling relationship. They feel true love for each other.
3. O’Brien, the two faced member of the thought police, a frightening portrait of a heartless person who is capable of inspiring trust and confidence in his victims and then coldly putting them through the grind in which they are completed rid of all traces of their past natural humanity and converted into instruments of the state.
4. Parsons, Winston’s neighbour, who is the over-zealous father of two scary hateful children in this dystopic London. He is denounced by his 7 year old daughter, and proud of it too. He and his family illustrate how the family as an institution is systematically broken up and the education of children is in the hands of a state that teaches them to hate, control and denounce any and everyone, especially their parents, to the thought police. The children’s mother is a mere servant who lives in fear of being denounced by them.

The book goes into the process of wiping out the past and future in great detail, to a time when thought is no longer free, people are no different from each other and live alone. A world in which truth ceases to exist and what is done is undone and one in which you do not have the freedom to say that 2+2=4. The axioms of the Ministry of truth are: war is peace, freedom is slavery and ignorance is strength.

The book is a credible account of the systematic destruction of a naturally proliferating diverse society. At the end the idea that there is no hope even in the Proles is put forth. They are considered helpless, like animals, and irrelevant as they are outside the system altogether. Full control is in the hands of the inner party that by virtue of controlling the past controls the future, and controls the present, thereby controlling the past.

The plot is forcefully borne out though the changes we see effected in Winston, who is put through the entire gruelling grid of macabre tortures that completely break him down and rebuild him again into a harmless, docile, alcoholic who finally feels true love only for Big Brother, his new God. Julia’s natural feelings in her soft supple body are likewise driven out giving over to the stiffly rigid and stony chastity beaten into her when she like Winston is pushed to the point of unendurable suffering when “All you care about is yourself” and you are forced to betray even the one you love.

The book effectively warns against power crazy individuals and their ideologies who use the evils of war to inflict suffering in order to perpetuate a society in which only they can flourish as they effectively break the spirit of man and his enjoyment of a richly diverse life in all persons who do not belong to the ruling elite.

Very relevant book today and always since people are but human. That aspect exposes us to vicious natures and behaviours that must be guard against.

Thank you both for the input. You can sign off with a name which personalises your feedback.
Tom

Hi,
Both the comments were posted by me. I must remember to sign my name so you know who I am.
Gemma

Orwell's books are always relevant. This one describes a general idea, as well as Animal Farm. The characters are very credible, the situation and actions could be compared with many historical periods. The language is very precise.