This is the feedback site for "Nutshell" which we discussed in October.

Below is an outline of some of the aspects discussed. To enlarge the image click on it.

You are invited to leave your own comments on the blog using the comments link below. 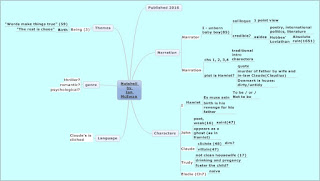 Oh God, I could be bounded in a nutshell and count myself a king of infinite space - were it not that I have bad dreams. SHAKESPEARE, Hamlet

This book is Hamlet retold, starting out with a beautiful first line (I didn't make a note of it, but it was) something like "Here I am upside down in a woman…" words we realise are those of the narrator who is a full term foetus as we read on. A most fascinating perspective based on the only and therefore heightened sense of hearing used that picks up everything that is happening from the trivial to the important. This puts the reader through a rollercoaster emotional ride of the unborn child's anxiety of who to believe in the love triangle that is his lot, felt from a position ready for birth, with his thoughts and head fully engaged, and terrified by what awaits him and might draw him in.
He wants to be in the happy care of his divine father and mother, but finds himself party to a plot to kill his father in which his mother is involved. He will try to foil it or, should he come to term too late, avenge it.

He is an innocent, with no allegiances or obligations, a free spirit, a blank slate that writes upon itself as it grows day by day. One day, long ago, he began conscious life, which was the end of illusion and the irruption of the real. He is defenceless by circumstance. His father is also defenceless, by nature.

John was "a form of man to end wars, rapine, enslavement, standing equal and caring with the women of the world". A handsome Greek God, with a career in letters, in poetry. He sadly sees that the garden of his marriage has grown full of weeds and decides it is time to clear them.

Trudy, the beautiful but immature person he loves, with irresolvable internal contradictions (she knows she killed the old family cat when she was 15), becomes a victim of her fear of adversity with John when she finally conceives their long sought for child. Her love changes to hate. Before she lovingly kissed John's scaly, red and hard psoriatic hands, nut now she can no longer stand to look at or feel them and wants them covered by gloves.

Claude the fraud, who has a whiff of sulphur about him is the bland and sloppy but rich property developer younger brother. Trudy lets herself be seduced by him. And they slide into a mechanical, perfunctory sexual relationship, devoid of romance or passion. They become caught up in ever mounting disorder, dirt and disrespect for themselves and others. Their dangerous but exciting flight frightens them, but Claude is trying to prove his mettle, i.e. that he deserves more than just contempt from his older sibling who has inherited the dilapidated family house.

The book reads very easily and fast. The humorous references to sclerotic contemporary European reality, with its ghosts and vulnerabilities, sometimes kind and a destination for unfortunate souls, was the modern day setting for a re-enactment of a well-known plot.

It is the triumph of realism over magic, the "is" over "seems", with felt sensations that are the beginning of the invention of the self. With adversity, there is pain and then there is poetry.

The writer writes from life. The reader imports symbols and associations.
I see the tyranny of the weak, in this case of Trudy and Claude, as opposed to the strong character of John.

I missed the book club meeting, but would like to share my thoughts with you.
Gemma Castellino

In the club we developed the theme of the parallel between Nutshell and Hamlet: the murder by wife and brother, baby as Hamlet who plans revenge, the dirty state of the house like Denmark in the play, the ghost's appearance... Some thought that McEwan was pretentious to pretend writing a modern Hamlet.
The father was viewed as flawed and weak. Claude was the villain and inarticulate - a snobby put down by McEwan?
The narrative viewpoint was praised as a tour de force since it was performed through a very narrow lense.
Some criticised the author for assuming a baby could be so well documented by listening to and understanding BBC podcasts.

The more I think about Ian Mac´s otives for making the foetus the axis os the story the more I believe that it wasn´t to give it IM´s voice to sound off his vision on the awful state of the world and of his oh so cosmipolitan opinions on wine and gastronomy but to give us his personal view of the world in terms of good and evil. Trudy and Claude, the Evil and the poet the Good. The oetus is too smug and overbearing to be a convincing Hamlet and the poet too idealistic and sure of his ability to prevail to come out of it alive. The novel revels in Trudy and Claude´s plans to murder the poet aad fulfil it to perfection. The author seems to applaud Evil. . I acknowledge his brilliance in the prose department but I deplore his brilliance in defending Evil. He seems obliious of the wrongness (?) of the situation that he I.M.) comes off, not as the deil´s advocat but as the devil himself. Sasha .

We didn't discuss this new, moral, viewpoint in the club. I think, though, that Trudy and accomplice get their comeuppance in the end since the baby forces then to stay and so not escape from the imminent return of the police inspector. Doesn't good or lawfulness win out on the end?

Very astonishing point of view and very well written. I would recommend it to anybody who wants to have a glimpse into modern literature in English. This is one of my favourite books by Ian McEwan along with On Chesil Beach.

Read and passed on to library.